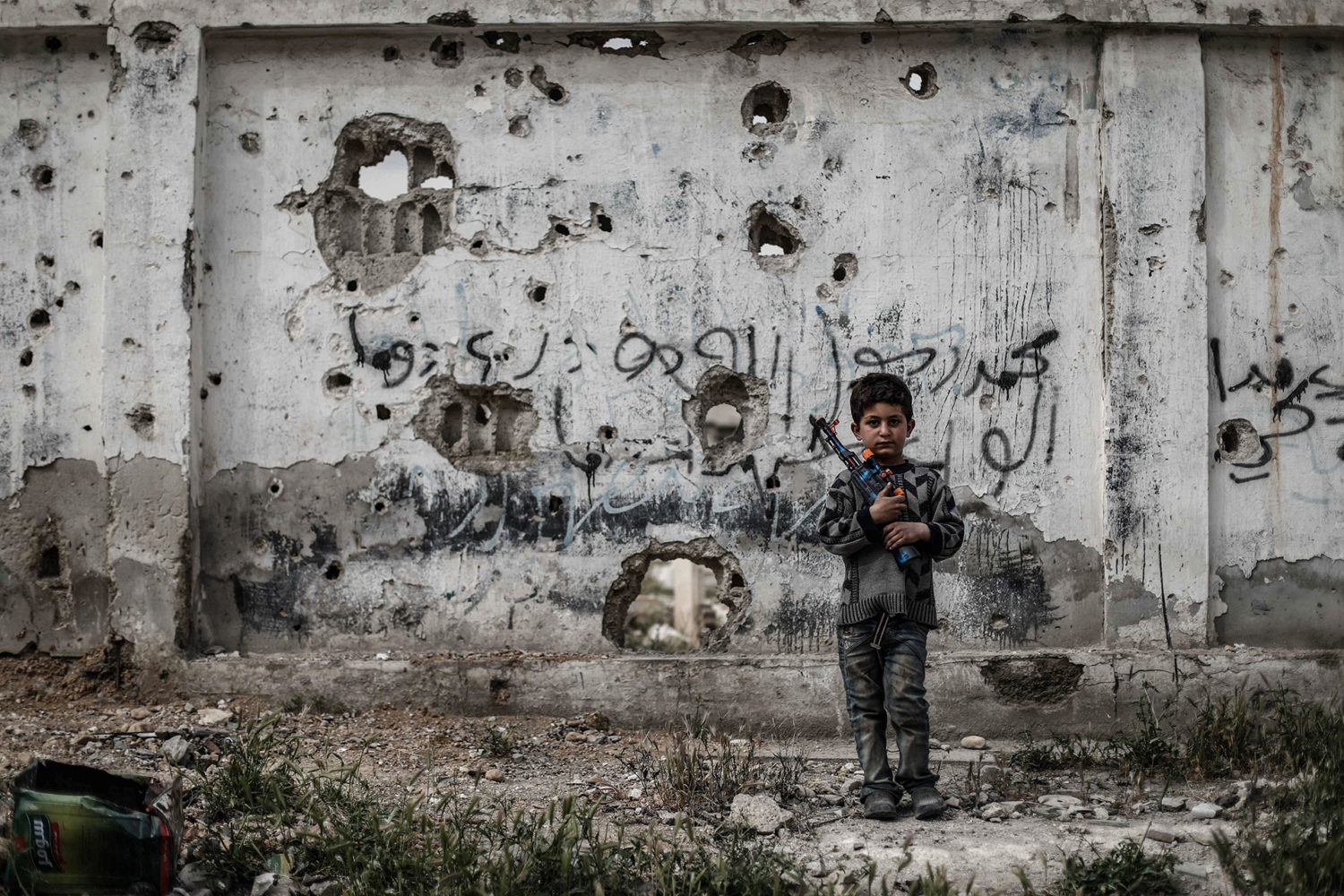 Sameer Al-Doumy was in eighth grade when the civil war in Syria started. Along with his siblings, he photographed his everyday life — and the horror that unfolded around him. As a young citizen of Douma, he was able to capture the war as an insider, documenting moments of despair and hope as his neighborhood faced an uncertain future. He spent seven years photographing the war. Today, he is a World Press Photo Award-winning journalist.

Al-Doumy’s painful but crucial civil war photos are among an astonishing 12,812 available to search on 500px. From documentation of war itself to photographs of refugees in Turkey, Greece, and Lebanon, many of these civil war photos teach us about the conflicts that are reshaping our world right now.

The role of war photography and civil war photos has changed in recent years. First of all, it’s more dangerous. In the age of social media, the camera wields more power than it once did, and as a result, photojournalists are often targets of violence. Al-Doumy uses an alias for his protection and the safety of his loved ones.

But at the same time, war photography is perhaps at its most powerful today. Photographers, especially those living in war-torn areas, can now use the internet to influence audiences around the world. War photography — and civil war photos — belong to everyone, not just a select few, and everyday people can influence change.

Yannis Behrakis, the Pulitzer Prize-winning photojournalist who extensively covered the refugee crisis in 2016, once said, “My mission is to make sure that nobody can say: ‘I didn’t know.’” He died earlier this year at 58 years old, but perhaps his goal can still be realized. In 2019, we all have access to conflict and civil war photos. It’s up to us how we respond to them.

Here’s a closer look at some of the civil war photos found on 500px. 500px Contributor Sobhi Dimachkieh took this photo of Syrian refugees in Lebanon in 2012, a year and a few months after the start of civil war. As of the end of last year, there were 1.5 million Syrian refugees live in Lebanon, but 74% hadn’t been given legal status. On October 18, 2014, 500px Contributor Guler Ateser, who is based in Istanbul, photographed this group of Syrian immigrant children. “[They] are playing with materials they find in the garbage,” she writes. “Their families [are] living in the ruins of abandoned houses. They earn [money] by collecting garbage or begging for their lives.” By the end of 2015 — the same year photographer Kemal Cellat created the portrait above — 2.5 million refugees were living in Turkey, the vast majority of them having risked their lives to flee the civil war in Syria. According to the UN Refugee Agency (UNHCR), only 40% of the children were in school. 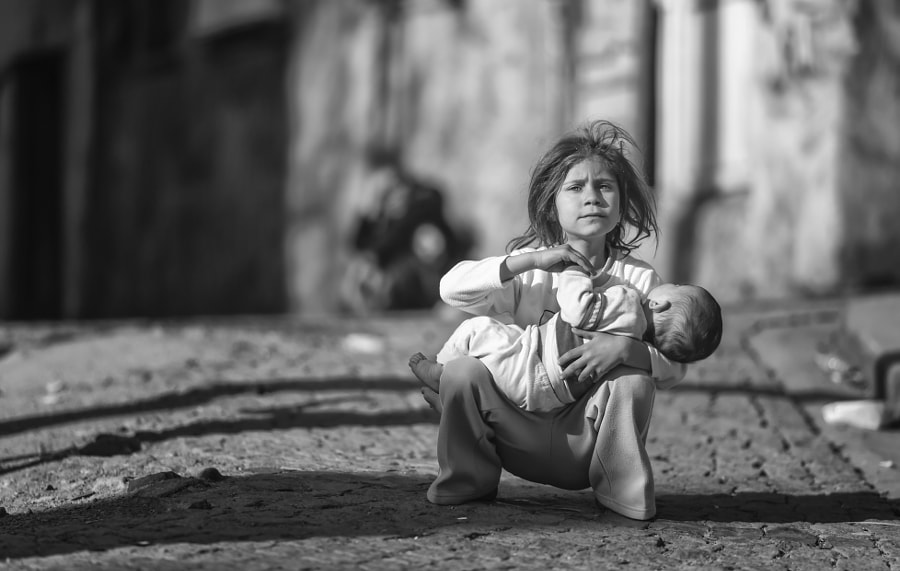 500px Contributor Metin Burak Kinacilar created this portrait of Syrian children in Istanbul in April 2015. Today, about half a million Syrians live in Istanbul — though a recent crackdown on refugees in Turkey has made headlines worldwide. 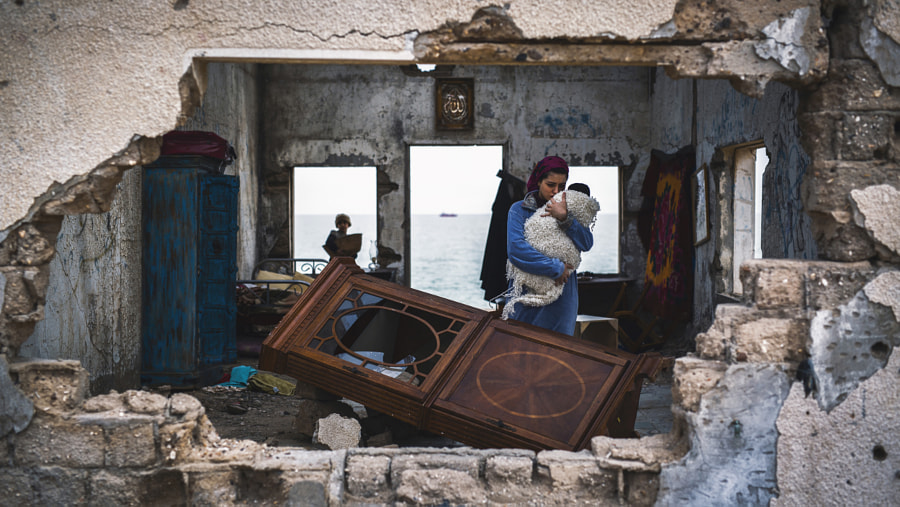 Among the scenes of trauma and loss, civil war photos throughout history have also documented the realities of daily life in conflict. This photo comes from 500px Contributor 1abdullmalek. 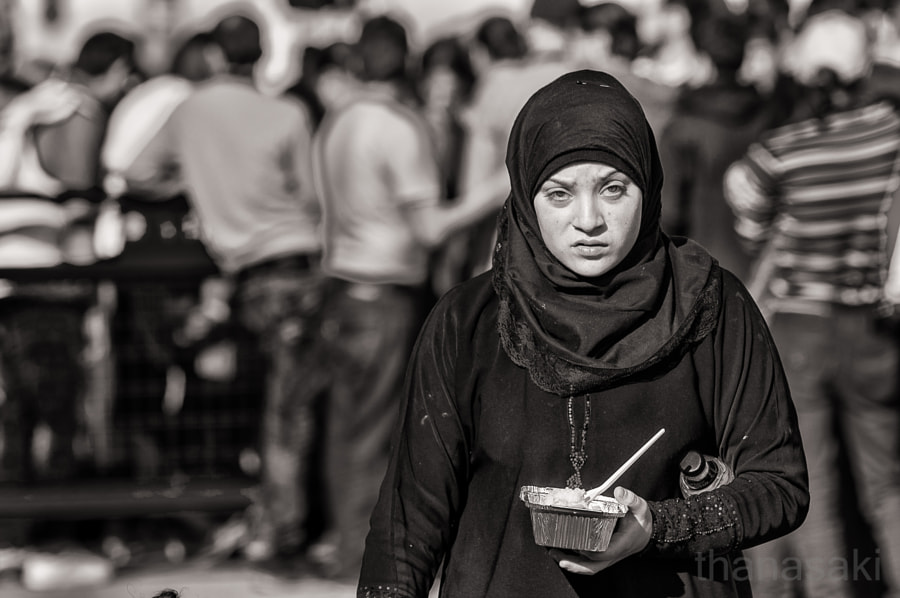 “Holding a meal and a bottle of water in her hands, [this woman] is returning to her tent in the hot-spot for refugees at the harbor of Piraeus,” 500px Contributor thanasaki writes in the caption for this image. 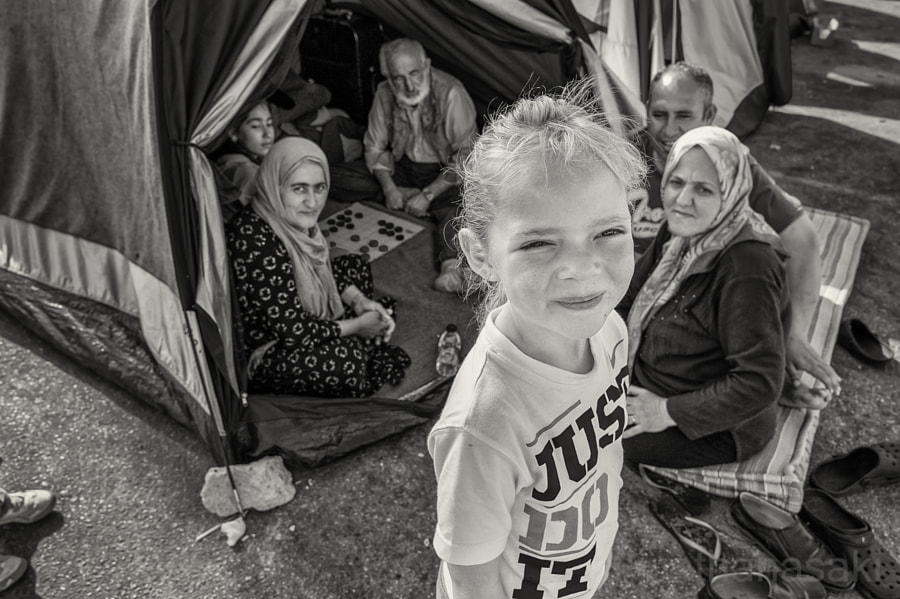 Thanasaki met these Syrian children in Piraeus, Greece in 2016. “These Syrian War refugees left everything behind in their burning country [to save] their lives but, in particular, to save the lives of their innocent kids,” thanasaki writes. 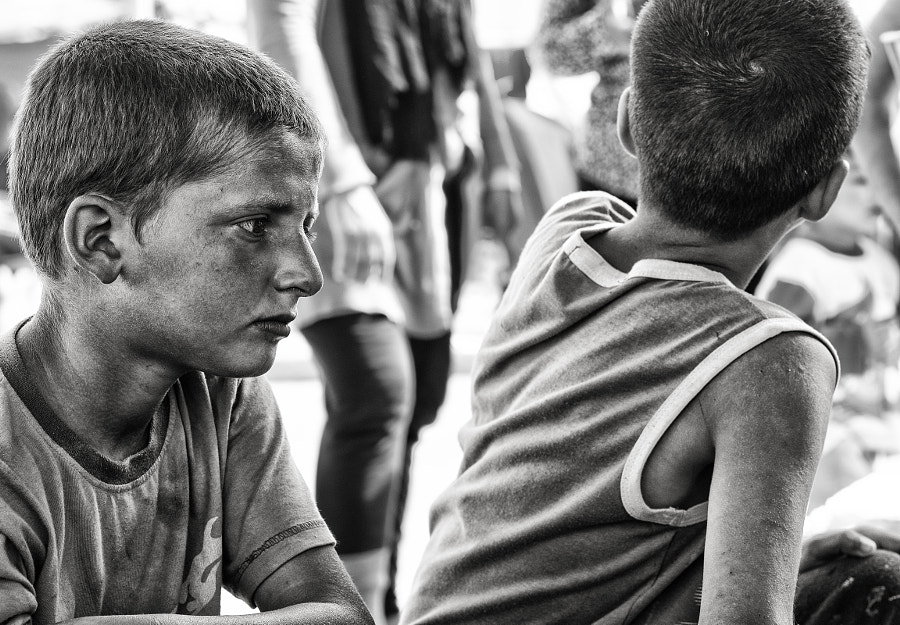 500px Contributor BYRON IN RENTI captured this quiet moment at the Idomeni refugee camp in Greece on April 19, 2016. Ten days later, Slate covered the conditions at the camp, where 12,000 people were living, many in donated tents. 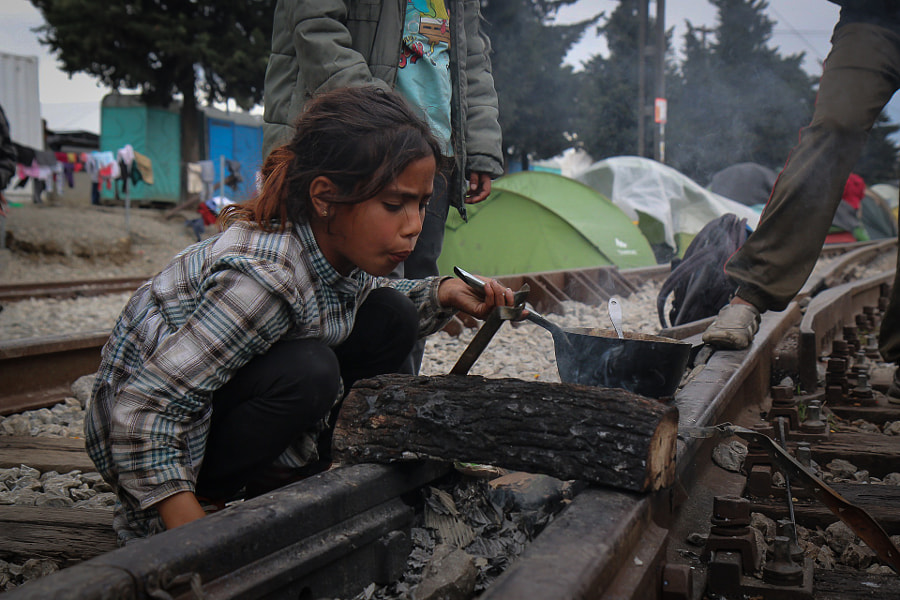 Photographer Aladin Samara visited the Idomeni refugee camp about a month later — on May 3, 2016. “On this windy gray day, I saw two girls from far away struggling to make a fire between the bars of the train [rail],” he remembers. “They wanted to cook the little rice they got from a volunteer.” Although his colleagues stepped in to help with the fire, Samara worried about their future: “Who will make them the fire next time?” 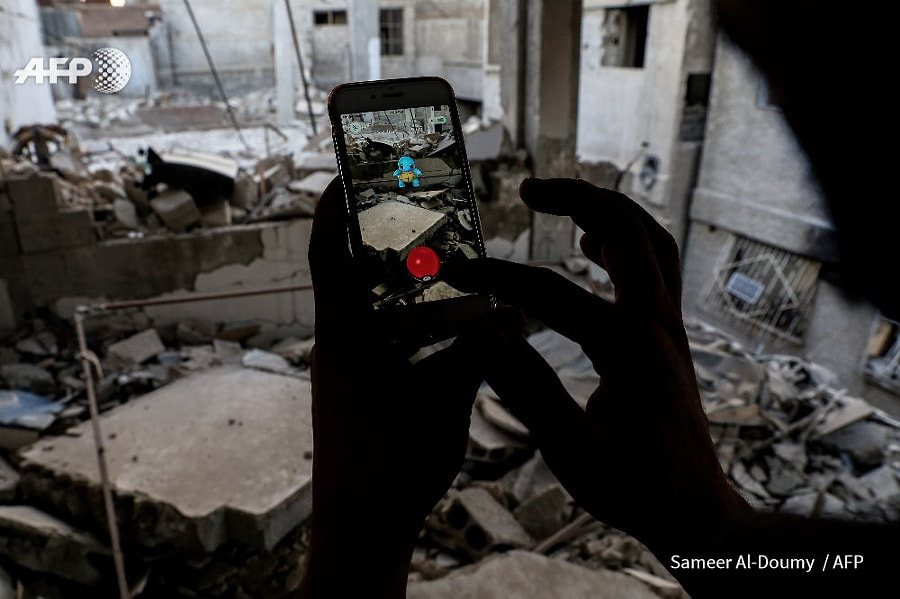 Another one of his civil war photos, Al-Doumy’s capture of a gamer playing Pokémon Go in Douma made headlines around the world, revealing how far-reaching the app truly was — and how ordinary people in Syria must contend with the danger that surrounds them. 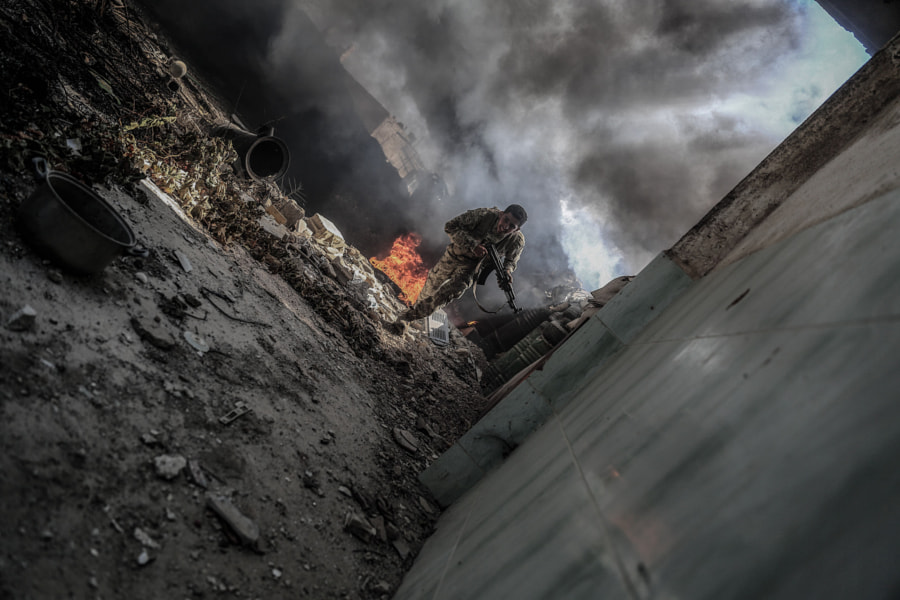 Al-Doumy photographed this fighter from the Syrian opposition group Jaish al-Islam in September 2016 as he fled sniper fire in Tal al-Siwan near Damascus. The Syria Civil Defense, also called the White Helmets, is a volunteer organization composed of ordinary citizens — like teachers, firefighters, and salesmen. They risk their own lives to rescue others; according to reports, 140 White Helmets have been killed, but they’ve saved 60,000 people. You’ll see them in a few civil war photos featured in this article. Syrian photographer Anas Aldyab documented this scene. 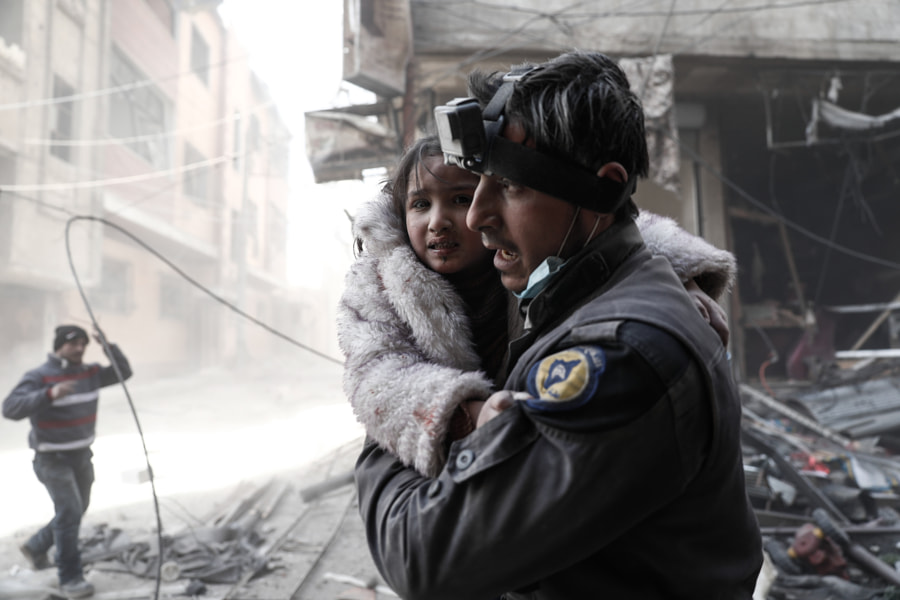 On February 25, 2017, Al-Doumy photographed a member of the White Helmets carrying an injured girl after a reported government airstrike in Douma. 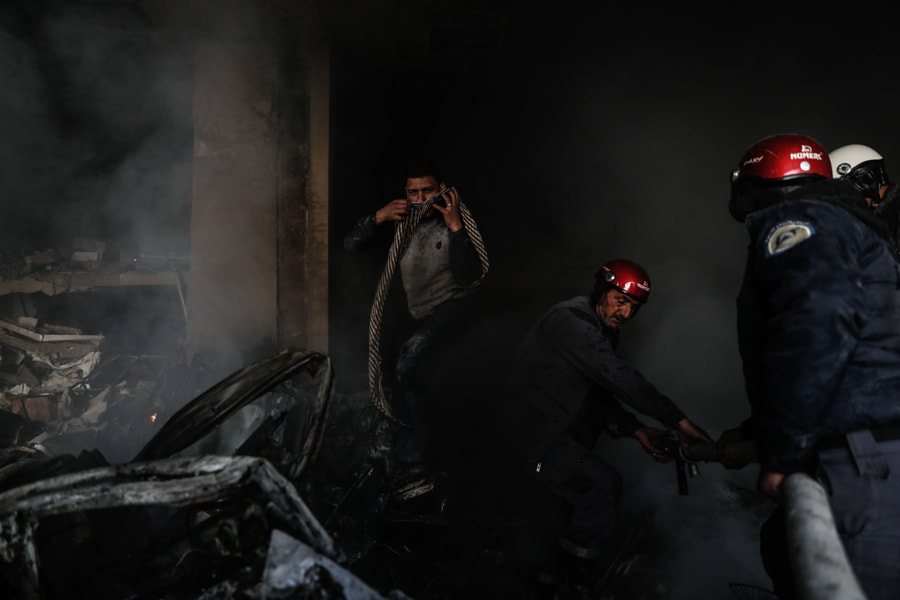 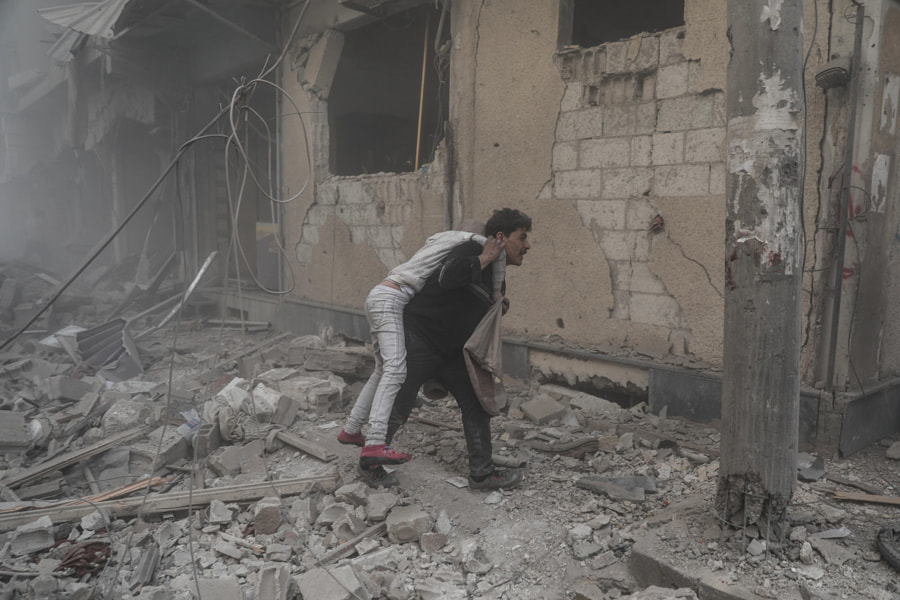 In this photo, Al-Doumy continues to document the aftermath of the airstrike on February 25 in Douma. Here, a young man carries a wounded child through the rubble. 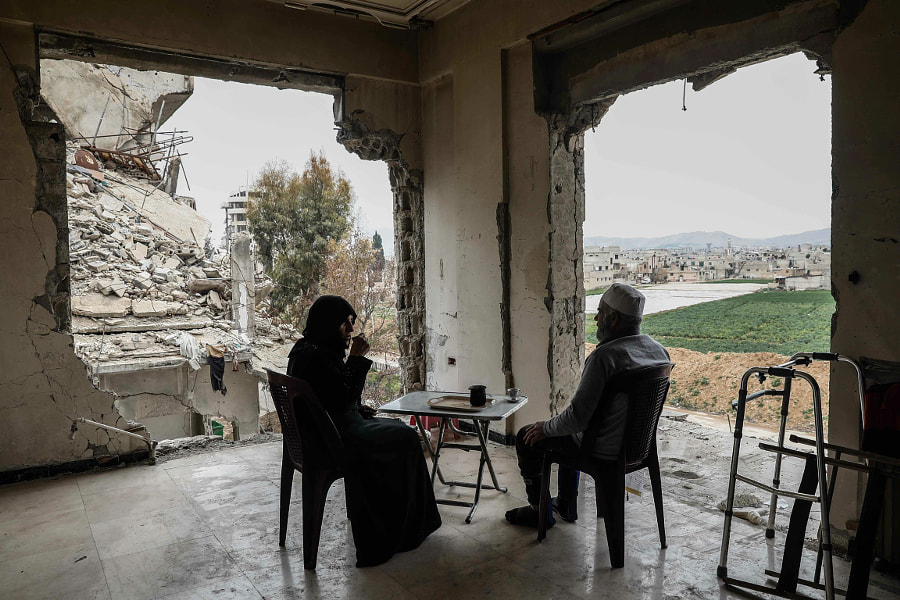 In the spring of 2017, Al-Doumy photographed Um Mohammed, 62, and her husband, 71. In this photo, they drink coffee in their destroyed home in Douma. The photojournalist posted an update on Instagram earlier this year. Um Mohammed was shot and injured by a government sniper two years ago, and although her health has improved, her husband was recently injured during an airstrike that left him unable to walk normally. 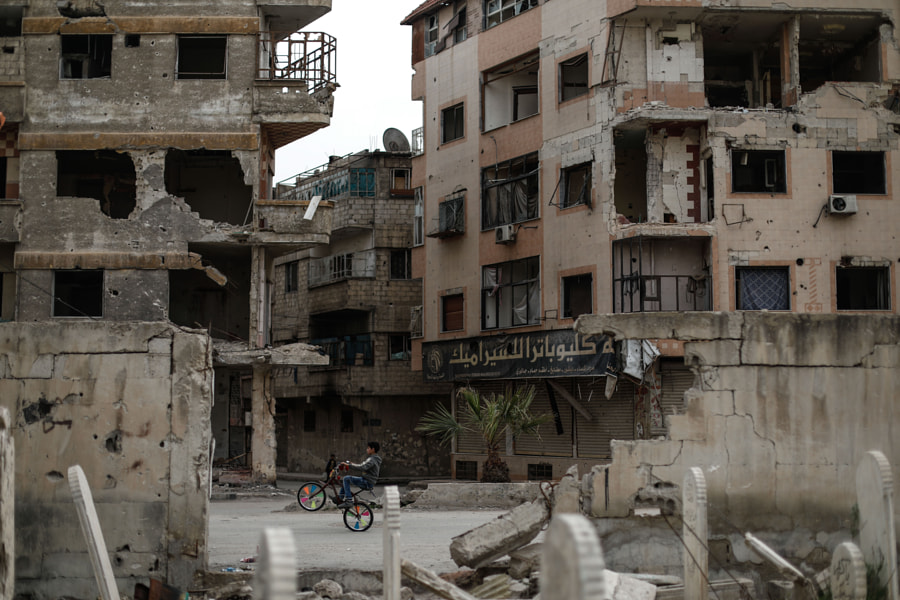 In another scene of everyday life amidst brutal conflict, Al-Doumy finds a boy riding his bike through rebel-held Douma in April of 2017. Some of the most powerful civil war photos don’t portray soldiers but instead show ordinary civilians going about their lives as best they can. 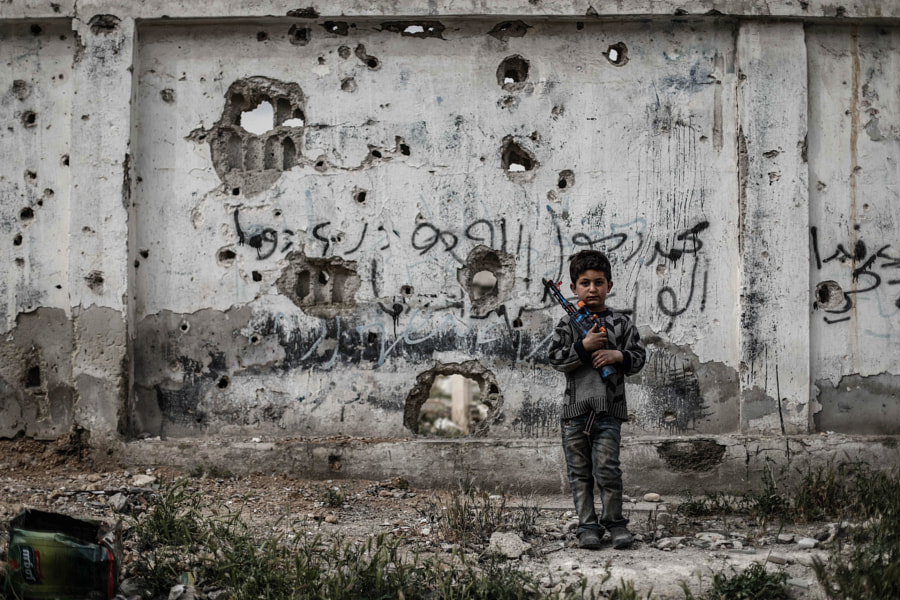 This civil war photo, also taken by Al-Doumy in Douma in 2017, shows a young boy with his toy gun standing before a bullet-scarred wall. Al-Doumy titles it ‘a dangerous game to play.’ 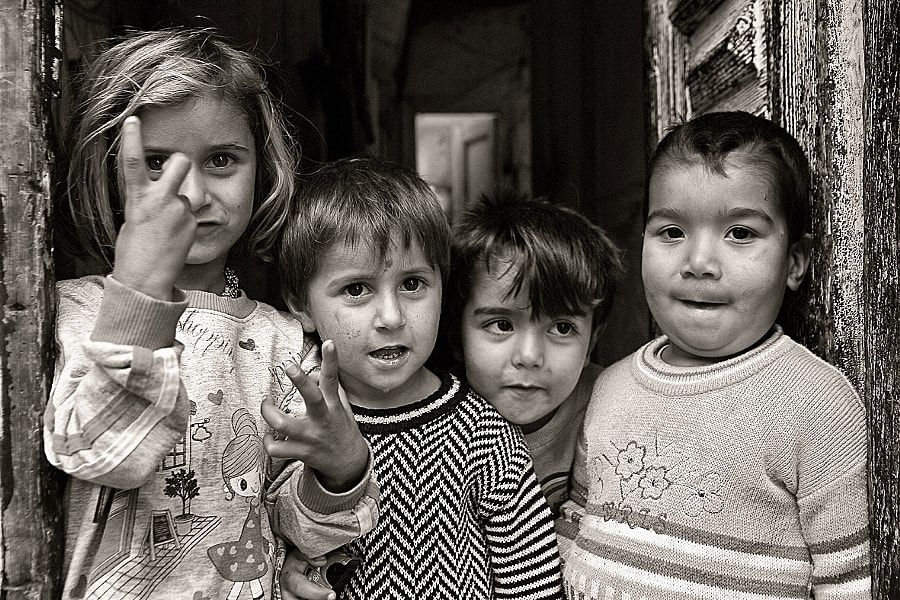 In November 2017, Rezzan Atakol, who is based in Istanbul, met this group of Syrian children. Created by the Egyptian artist Ahmed Raafat, this civil war photo visualizes the consequences of the Syrian Civil War, a brutal conflict that’s raged on for more than eight years — and counting. So far, the war has killed 400,000 individuals and forced 5.7 million to seek refuge in other countries. 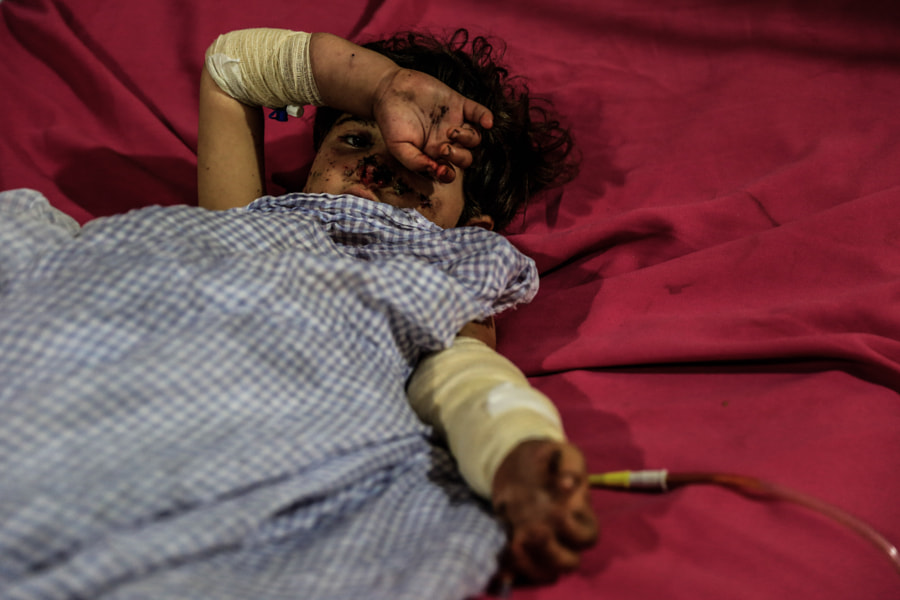 Before he embarked on his years-long journey of taking civil war photos, Al-Doumy dreamed of becoming a doctor. In the caption for this photo, he writes, “Five-year-old Syrian girl Rima lies in a hospital bed after she was wounded in shelling [in] the village of al-Reehan.” He later added, “It’s terrible […] but it’s our reality. I hope this tragedy will end soon!”

Not on 500px yet? Sign up here to explore more impactful photography.

How to deal with online critics and trolls without losing your mind
Shooting a Portrait with Light, Shadow, and Highlight
Canon is Working on Three New Full-Frame EOS R Cameras for 2020: Report
How Polaroid Pioneered the Instant Photography Revolution
Breathtaking New York City photography